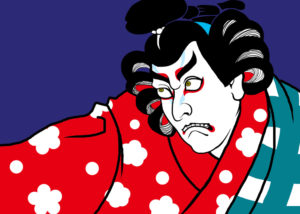 There are many types of traditional entertainment in Japan, but among these, Kabuki, which is registered as an UNESCO intangible cultural heritage, is particularly highly rated even overseas.

Kabuki originates from the early Edo Period (the early 17th century) when the actions of people who attracted attention by acting or wearing clothing that was outside of the realm of common sense were known by the verb “kabuki” and such people were called Kabuki Mono. Kabuki Odori (kabuki dance) encompassed the unique clothing and movements of the Kabuki Mono and this is said to the be the origin of today’s Kabuki.

One of the features of Kabuki is that it is only performed by males.  Originally, Kabuki Odori was performed by women, but since women were subsequently banned from performing on stage for reasons such as disturbing morals, it is said that male actors who portrayed female roles (onna gata) appeared.

In this article, we will introduce costumes and makeup which are particularly striking even within the world of Kabuki. 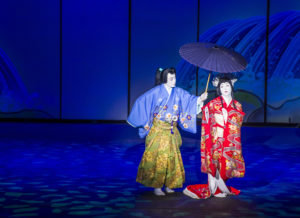 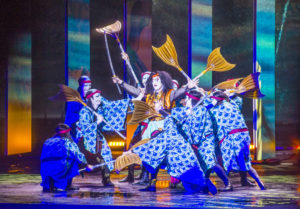 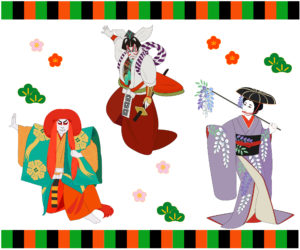 One of the highlights of Kabuki are the spectacular costumes.

Since this is a traditional form of entertainment which became popular in the Edo Period, the standard for costumes are those of the Edo Period, but the design is often exaggerated to look good on stage or the various patterns and sewing devised so that it is easy for the actors to move.

The basic style of the male roles known as “tachiyaku” are kimonos and hakamas, but this may differ depending on roles such as tradesmen and samurai.

Also, the costumes for female roles known as “onna kata”, are devised with the sleeves, bottoms and obis of kimonos draping so that the male performers look more feminine.

The costume colors are also decided based on the role, for example, a princess may have a red costume while the evil antagonist may be clothed in black or brown.

Costume patterns are based on traditional patterns and many stipes and lattice patterns developed in the Edo period can often be seen, incorporating the bold and delicate design sense of the Japanese. The dyeing and embroidery techniques are also very beautiful.

In addition, the manner in which the kimono obi is tied and hairstyles change according to the type of role and it might be interesting to pay attention to these differences. The way that an actor instantly changes costume on stage also makes the performance very lively.

Kumadori refers to the large red and blue lines painted on the face of kabuki actors and is a unique method for kabuki and is one of its major features.

It is said that crimson and ash was used as makeup so that the expression of the actors could be seen even by spectators sitting far from the stage of the dimly-lit playhouses of the Edo Period.

The lines drawn on the face emphasize the ridges of blood vessels and muscles, expressing the type of role and feelings and the larger number of lines indicates how powerful the character is.

Kumadori uses the 3 main colors of red, blue and brown and each adds meaning and a role.

Red signifies justice, strength and youth and is used for defenders of justice and heroic roles

It is said that there are 100 types of kumadori, but the majority of these use reddish colors.

In general, kabuki actors apply make-up themselves, seeing the individuality and differences between actors is also an interesting aspect of watching kabuki. 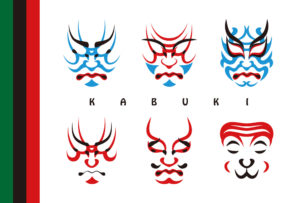 In recently years, in addition to traditional kabuki, “super kabuki” which incorporates popular manga works is also performed and continues to entertain the audience with ingenuity and efforts suiting the current age.

Earphone audio guides that support multiple languages are available for rent and an English language information site is available, so why not take a look if you are interested in learning more about kabuki.