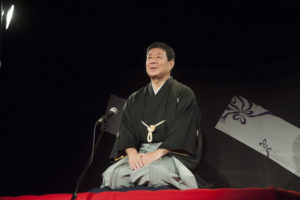 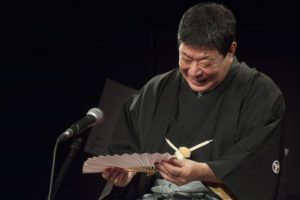 Have you heard of the Japanese traditional performing art called Rakugo?

It might not be as well known overseas because the performance is not as eye-catching as other performing arts such as kabuki.

However, Rakugo can be said to be one of the traditional Japanese performing arts that has been beloved by the general public since ancient times.

Now, we’ll tell you a little bit more about Rakugo.

Rakugo is one of the traditional Japanese styles of storytelling that has been handed down through the ages.

Tales are usually humorous or sentimental in nature with a clever conclusion highlighted by the “ochi” or punchline.

Unlike other traditional performing arts such as kabuki, they rarely rely on costumes, tools, and music, and they sit on cushions placed on the stage called "Kouza." The performer plays all the parts by themselves, typically with the story proceeding in a conversational format.

In addition to the narration, it is a unique performance in which the performer uses a fan and a hand towel and expresses the story through body movement and hand gestures. It is a craft that requires a high level of skill. 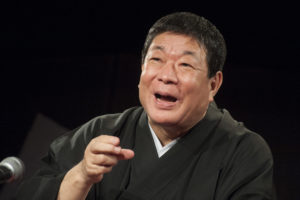 It is said that Rakugo started around the end of the Muromachi period to the Azuchi-Momoyama period in the 1500s by a group of people called Otogishu who served under the daimyo of the Sengoku era.

They acted as conversation partners and communicated the outside world to their daimyo. Rakugo has developed as an extremely simple and familiar art form for the common people, where the world of the story is developed through the skill of the storyteller (Hanashika) and the audience's imagination, without the use of elaborate costumes or large-scale stage sets as much as possible.

Rakugo developed mainly in urban areas, and there are two major origins of Rakugo, one being Edo (present-day Tokyo) and the other Kamigata (present-day Osaka). They differ in the content of the performance, the ending, props, and customs. Another difference between Edo and Kamigata Rakugo is the use of miedai (a small desk placed in front of the performer), kobako (a small clapper), and hiza-kagakure (a low partition) as props in Kamigata Rakugo. Although mutual exchange between Edo and Kamigata Rakugo has flourished since ancient times, the regional characteristics still remain strong.

A kimono is the most common attire for a Rakugo performer. Originally, since Rakugo is considered to be a storytelling show in which the story is the main attraction, the kimono and props were considered to be subdued enough not to interfere with the story, and the "black gosho-mon" was the standard.

The kimono worn by Rakugo performers differs slightly according to their ranks. In Edo Rakugo, there are different ranks in hierarchical order: "mauchi", "nitsu-moku", "mae-za", and "mae-za apprentice".

Only after reaching the nitsu-moku rank is it possible to wear the montsuki or haori.

While there are concerns that people are losing interest in the traditional arts in modern Japan, there are signs of change in the world of Rakugo.

Canadian Rakugo comedian Katsura Sunshine, in particular, has been performing Rakugo in London and New York, translating Rakugo into English and other languages while paying attention to the unique atmosphere and phrases of Rakugo.

The unique tone, phrases, and vocabulary of Rakugo are unfamiliar to even Japanese people, but it is not an easy task for a non-native speaker of Japanese to make it in this world.

In particular, in the world of Rakugo, there is still an apprentice system in place, and this system, which can be called feudalistic, is difficult for foreigners to understand.

Nevertheless, the future activities of these students are attracting attention as an opportunity for a new change that can be brought about only by being a foreigner and eliminating the stereotypical view that "you can't become a Rakugo performer unless you are Japanese".

Rakugo doesn't have the popularity of anime or the glitz of kabuki. When you go to see a performance, you may be surprised by the simplicity of the performance, but once you learn about it, it is a very profound art of storytelling.

It's a great way to get a taste of Japan's traditional performing arts when you visit the country.