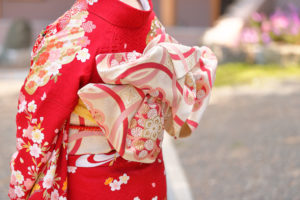 I imagine that every region has traditional native costumes. In Japan, the kimono falls under this category. However, there are not as many opportunities in modern Japanese society to wear the kimono as foreigners imagine. On the contrary, the fact is that many people are unable to wear kimono themselves because there are hardly any occasions for them in daily life. We would now like to share a bit of information about the practice of wearing kimono that still remains today despite these circumstances and the types of kimono that are worn in these instances.

The kimono is a unique cultural element that is strongly tied to the land, tradition, artisanship, language, and various other Japanese customs. In Japan, where the four seasons are defined clearly due to the environment that is full of nature and surrounded by the ocean and mountains, a unique aesthetic sense produced by the changing seasons is expressed in the kimono. In the sense of enjoying the seasons, wearing materials and designs that are half a month to a month ahead of the time of year is considered the proper slots in the world of the kimono, as cherry blossom designs are worn in March, ahead of full bloom in April.

Representative events for opportunities to wear kimono as a child are Miyamairi and Shichi-Go-San.

Miyamairi is a rite of passage for expressing gratitude for the safe birth of a baby and praying for the healthy growth of the baby. The official attire for the baby during this event is a Japanese costume involving an inner kimono made of white habutai under a festive kimono. The festive kimono has different designs depending on whether the baby is a boy or a girl. Boys’ kimono tend to have hawks, war helmets, dragons, tigers, and other strong, vigorous designs, while girls’ kimono tend to have butterflies, traditional Japanese balls, bells, court carriages, drums, and other brilliant, elegant designs.

Shichi-Go-San refers to a rite of passage during which children wear holiday clothes to visit a shrine on November 15th of the year that they turn 3, 5, or 7 years old. In the present day, girls go when they turn 3 or 7 years old, while boys go when they turn 5 years old. This rite of passage is derived from ancient rituals. Kamioki meant that babies who had been having their heads shaved before could begin to grow their hair at the age of 3. Hakamagi meant that children could wear hakama for the first time at the age of 5 and begin climbing the steps to adulthood. Obitoki meant that children could wear obi belts like adults at the age of 7.

Kimono is the most common form of holiday clothes worn in this instance. They wear formal attire that is similar to that of adults, as 3-year-old girls wear a soft heko obi with their kimono called hifu. 5-year-old boys wear a haori and hakama, and 7-year-old girls wear a furisode. The designs worn in this instance are similar to those for Miyamairi, as some people make over the festive kimono from Miyamairi for use during Shichi-Go-San. 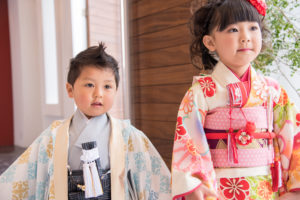 In terms of opportunities to wear kimono as an adult, ceremonial occasions come to mind, but perhaps the representative event is Coming of Age Day. In Japan, people are considered to become adults when they reach 20 years of age, and this turning point is celebrated splendidly. Kimono are popular for the attire for this celebration. Apparently, over 90% of women participating in the coming of age ceremony wear furisode kimono. In contrast to the popularity of kimono for women, many men wear suits, as few people wear a crested hakama, which is considered the formal attire. Therefore, the truth is that women in glorious kimono stand out at coming of age ceremonies. The furisode, which many women wear in this instance, is the most formal attire for unmarried women and refers to Japanese clothing with long, hanging sleeves. They have a variety of designs that are mainly categorized as classical designs; such as plants, flowers, butterflies, birds, and fans; modern designs that are avant-garde and geometrical; and new classical designs, that have the same designs as classical designs but with unique ways of adding the designs, such as on the sleeves only. 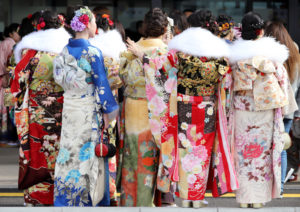 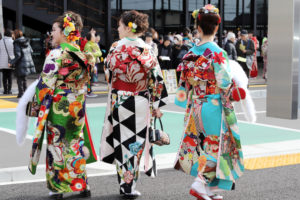 The yukata is the representative form of Japanese clothing with the most opportunities for casual wear. These days, yukata are popular as essential forms of fashion for events during the summer, but in the past, they were known as yukatabira to be worn when entering a steam bath. They were popularized as clothes to wear after a bath during the Edo Period.

Solid indigo or solid white were the main styles for old yukata, but color variations have become diverse today for this clothing that is highly popular among people who go to firework shows. The fabric used to only be made of cotton, but that has changed to the point where hemp blend, pure hemp, and other fabrics used for kimono are also commonly seen now.

There is no need for an under-kimono, which is worn with normal kimono, and it is common for people to wear sandals with bear feet instead of with Japanese socks.

Of late, there are also many designs with mixed Japanese and Western elements, as young people like yukata with frills and lace around the chest, short lengths like miniskirts, or other unique designs. 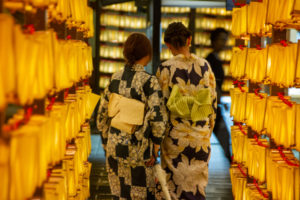 As the shift away from the kimono in modern times has become a concern, various ideas are continued to be made in the Japanese clothing industry to add any opportunities to wear kimono. To help people who do not know how to wear kimono or do not have kimono, kimono rentals and maiko experiences are provided and simplified obi called tsukuri obi that can be put on or taken off using tape are sold together with relatively inexpensive yukata. These services are highly popular among visitors to Japan, as they can be experienced casually and are easy to take home as souvenirs.

When you visit Japan, we suggest you try this experience by all means. 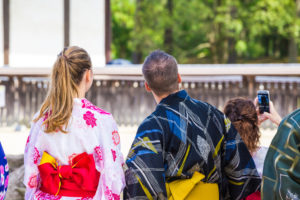