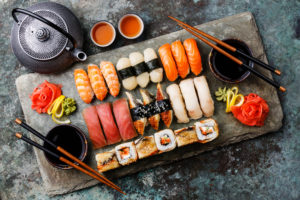 Japanese cuisine (or ‘Washoku’) has long been admired outside of Japan for its focus on health & beauty, and in fact in 2013 it was registered as a UNESCO Intangible Cultural Heritage, which has seen its popularity rise even higher. Sushi is possibly the most famous example of Japanese cuisine, and you could go as far to say that every major city in the world is home to at least 1 sushi restaurant. It has become an example of Japanese cooking that’s beloved by people all over the world.

Sushi is a Japanese dish that consists of ‘sumeshi’ (cooked rice mixed with vinegar) combined with a variety of different kinds of seafood. When you mention sushi, many people imagine something made with raw fish, but it can also be made with cooked seafood, as well as eggs, vegetables, and many other ingredients. People outside of Japan may also have a strong image of sushi being something eaten exclusively at sushi restaurants, but in Japan it’s even sold at supermarkets and convenience stores. For Japanese people it’s a dish that’s always close at hand. It’s even common to make many different types of sushi at home. We’re going to introduce to you some varieties of sushi that people overseas may or not be familiar with. 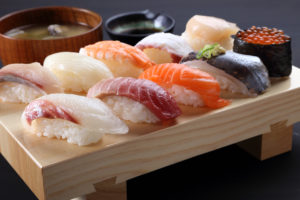 This is the most common variety of sushi. Nigirizushi consists of small clumps of sumeshi that have been molded into shape by hand, and then capped off with a topping ingredient known as ‘sushidane’.

It was invented in the Edo Period, where it was made with fresh seafood & seaweed taken from the Edomae Sea (now known as Tokyo Bay). This is why it’s also sometimes known as Edomae sushi. It’s said that nigirizushi began to spread around Japan after sushi chefs in Tokyo were displaced in the Great Kanto Earthquake of 1923, causing them to disperse around the country. 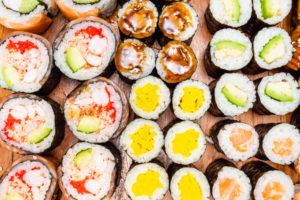 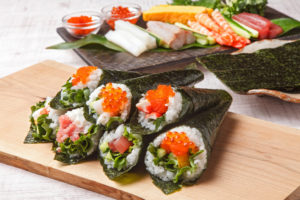 Makizushi refers to the long & slender sushi made by wrapping sumeshi and other ingredients in seaweed. It’s also sometimes known as ‘makimono’, ‘norimaki’, ‘hosomaki’, and depending on the thickness, ‘futomaki’. While hosomaki only uses 1 filling ingredient, futomaki uses many.

The most common way to make makizushi is by evenly spreading sumeshi over a strip of seaweed, placing the filling ingredients right in the center, and then rolling up the seaweed. However, there is also a variety known as ‘uramaki’, where the seaweed is placed on the inside and the rice and other ingredients are on the outside. The most famous example of uramaki is the California roll.

Additionally, makizushi is most commonly made using ‘makisu’, which is a small bamboo mat. But some people like to roll the seaweed, rice, and fillings by hand, which is what’s known as ‘temakizushi’.

Temakizushi is a popular dish to make at home for parties in Japan, and being able to lay out the sumeshi, seaweed, and fillings separately to allow people to pick their favorite ingredients is the secret to this dish’s success. You can match the fillings to your own tastes. 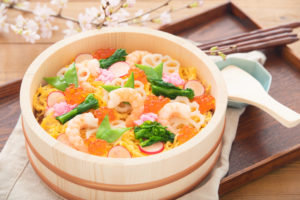 Chirashzushi is made by spreading out sumeshi in a tub or container, and scattering seafood, or other ingredients of your choice, over the top.

The end result is a very colorful dish, which makes it a popular choice to make at home, especially for the Doll’s Day holiday in Japan, as well as for other celebrations.

Chirashizushi also makes use of ingredients that are said to bring good fortune, such as prawns and lotuses, which makes the dish a sort of good luck charm. When the other ingredients are mixed into the sumeshi itself, that’s what’s known as ‘gomoku chirashi’. 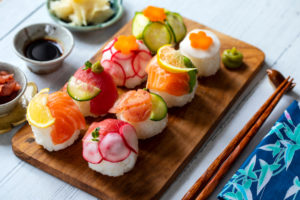 Temarizushi refers to bite-sized sushi rolled up into little balls. They’re smaller than regular nigirizushi, and it’s said that this style was devised to allow geisha caked in heavy make-up to have a bite to eat without having to open their mouths too wide. They can be topped with sashimi, vegetables, or anything you like really, and in fact in Kyoto they even make temarizushi with pickled vegetables.

The rather cute & colorful designs of temarizushi make for popular photos on social media too. They’re quite easy to make with just a bit of plastic wrap, so why not try making some for yourself next time you’re throwing a party?